CLOSER TO THE TRUTH COMMUNITIES [ CHARLOTTESVILLE ]

The Guide was particularly useful in prompting a wide range of reflections beyond a simplistic 'who was wrong and who was right'.

–Dr. Frank Dukes, Author of Reaching for Higher Ground in Conflict Resolution and Resolving Public Conflict and Director of the Institute for Environmental Negotiation 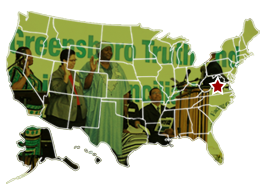 The University and Community Action for Racial Equity (UCARE), formerly known as the University Community Racial Reconciliation Project, worked in partnership with UVA’s Office of African American Affairs and the Carter G. Woodson Institute for Environmental Negotiation to show Greensboro: Closer to the Truth at a special 2010 MLK Day screening and dialogue event organized for the larger Charlottesville community. The Office of African American Affairs was the main organizer of the MLK Day screening. They used the film to stimulate dialogue about community reconciliation and a viable process for achieving it. The momentum from these dialogues was then channeled into preparing community action groups to address relevant and focused concerns in the community, organized into the following themes: truth, understanding, repair, and relationship.

The work of the UCARE began in 2007, in response to a statement of "profound regret" by Virginia's General Assembly for the Commonwealth's treatment of African Americans and Native Americans. Since its inception, their vision has been to come up with a systematic, coordinated effort involving University students, administration and faculty and staff, alumni, and community members in defining how this University community can complete the transition from any continuing legacy of slavery and segregation to a community of shared purpose.