CLOSER TO THE TRUTH COMMUNITIES [ OAKLAND ]

This film will resonate with the students given their hardships in life. We see Closer to the Truth as a catalyst to take action to heal. Spaces need to be provided for youth to address trauma. We want to provide youth the space to seek comfort and strength with any tragic experience and Closer to the Truth can help us to do just that. 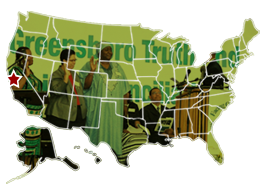 Youth Together in Oakland, CA, held screenings of Greensboro: Closer to the Truth on high school campuses to help support conversations about reconciliation and mediation with hundreds of students who are interested in alternatives to suspension and other disciplinary measures currently being utilized. They used the film to train campus youth leaders on the issues and to effectively facilitate the screenings: two on high school campuses this Fall (Skyline and Youth Empowerment School) and one large public screening at the First Congressional Church of Oakland for the Oakland community at large in February.

For the Public Screening, Youth Together partnered with various local ally organizations to bring lessons from the previous screenings in high schools to local adult allies and open up a dialogue about truth commissions, restorative justice practices at the high school level, the healing of trauma, and other relevant issues raised by the film. Panelists from these local organizations and a youth representative presented their perspectives on these issues and helped to guide audience members through a conversation about the film and how it relates to their own local concerns.

Youth Together was recently granted the Champions of Change award by the Agape Foundation Fund for Nonviolent Social Change and honored at their 40th anniversary celebration. The Award honors their tireless work improving school conditions and student consciousness in East Bay schools for the past thirteen years. See video here.

Active Voice and Good Work Films produced this video, "Students with an Active Voice: Using Film to Reduce Violence in an Urban School," to highlight one of the Project partners, Youth Together in Oakland, CA, and the exciting ways they were able to creatively leverage the power of this important film to educate and inspire their youth leaders to action.